Light at the End of the Brexit Tunnel

Light at the End of the Brexit Tunnel 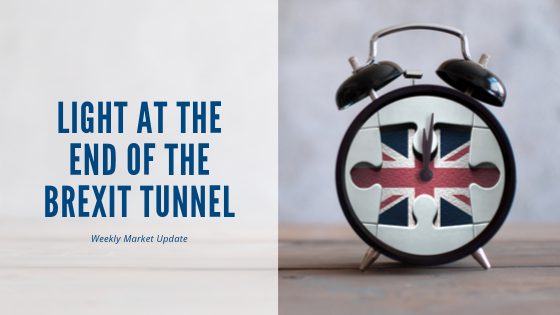 The debate over the United Kingdom’s (U.K.) withdrawal from the European Union (EU), or Brexit, is reaching another milepost in what could be an action-packed week.

Talks between the U.K. government and the EU have entered “tunnel” negotiation mode, in which all details of behind closed doors talks are expected to remain secret until any deal occurs. This negotiation style allows negotiators from both sides to throw around some of the more unusual proposals without fear of political repercussions.

The clock is ticking to see what emerges on the other side of the “tunnel,” as EU member states need to agree on any proposed deal at their two-day summit beginning October 17. If there is an agreement, the U.K. Parliament would then vote on the proposed deal on October 19, its first Saturday session in nearly 40 years (Super Saturday). Saturday night is the deadline set by U.K. members of parliament (MPs) at the start of September when they passed the Benn Act (a law that compelled the British Prime Minister to ask the EU for an extension if no deal with the EU had been agreed to by that date).

If no deal is reached in Super Saturday, Prime Minister Boris Johnson’s government possibly could try to overthrow the Benn Act and proceed with a “no deal” Brexit—a move that could kick off a constitutional crisis in U.K. politics. Meanwhile, MPs advocating to remain in the EU could also take control of the Super Saturday agenda and force a parliamentary vote on a second Brexit referendum.

Overall, several outcomes are still on the table: a “soft” Brexit (with a deal), a “hard” Brexit (with no deal), and another delay in the Brexit deadline (with a chance for a second referendum). As shown in the LPL Chart of the Day, hope for an amicable resolution has boosted the British pound to a three-month high versus the U.S. dollar.

We’re watching for new developments in Brexit talks, and it looks like we’ll get some sort of resolution by the end of the week—even if it’s just another delay. The most challenging economic scenario would be a “hard” Brexit on October 31, as international corporations would need to rapidly adjust to new rules, especially on trade. We see this scenario as unlikely, though, given the legal challenges it could raise and that all parties now seem more willing to work toward a resolution.

“No matter the outcome, we expect it to be a minor event for global markets as the U.K. comprises only 4% of global output,” said LPL Financial Senior Market Strategist Ryan Detrick. “However, we are still cautious on the European economy and developed-market equities.”

The opinions voiced in this material are for general information only and are not intended to provide specific advice or recommendations for any individual security. To determine which investment(s) may be appropriate for you, consult your financial advisor prior to investing. The economic forecasts set forth in this material may not develop as predicted.

All indexes are unmanaged and cannot be invested into directly. Unmanaged index returns do not reflect fees, expenses, or sales charges. Index performance is not indicative of the performance of any investment. All performance referenced is historical and is no guarantee of future results.

Investing involves risks including possible loss of principal. No investment strategy or risk management technique can guarantee return or eliminate risk in all market environments.

This Research material was prepared by LPL Financial, LLC.